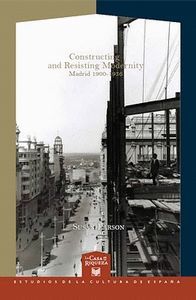 There were a number of discourses of modernity in circulation in Madrid in the early part of the twentieth century and these had an impact on the desires and ambitions of those who shaped the spaces of the city. The urban planner, the architect, and the author all have to have some kind of model, some image, some concept in mind before they put pen to paper.

Constructing and Resisting Modernity studies the urban spaces imagined by the technocrats who had the power to shape real urban spaces in Madrid and relates them to the fiction of authors such as Carmen de Burgos, José Díaz Fernández and Andrés Carranque de Ríos who responded by creating utopian and dystopian narratives that critiqued a wide range of experiences of modernity.