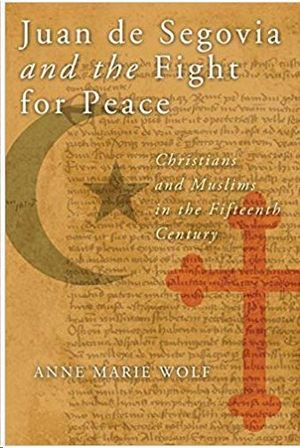 JUAN DE SEGOVIA AND THE FIGHT FOR PEACE

CHRISTIANS AND MUSLIMS IN THE 15TH CENTURY

Juan de Segovia (d. 1458), theologian, translator of the Qur'an, and lifelong advocate for the forging of peaceful relations between Christians and Muslims, was one of Europe's leading intellectuals. Today, however, few scholars are familiar with this important fifteenth-century figure. In this well-documented study, Anne Marie Wolf presents a clear, chronological narrative that follows the thought and career of Segovia, who taught at the University of Salamanca, represented the university at the Council of Basel (1431-1449), and spent his final years arguing vigorously that Europe should eschew war with the ascendant Ottoman Turks and instead strive to convert them peacefully to Christianity. What could make a prominent thinker, especially one who moved in circles of power, depart so markedly from the dominant views of his day and advance arguments that he knew would subject him to criticism and even ridicule? Although some historians have suggested that the multifaith heritage of his native Spain accounts for his unconventional belief that peaceful dialogue with Muslims was possible, Wolf argues that other aspects of his life and thought were equally important. For example, his experiences at the Council of Basel, where his defense of conciliarism in the face of opposition contributed to his ability to defend an unpopular position and where his insistence on conversion through peaceful means was bolstered by discussions about the proper way to deal with the Hussites, refined his arguments that peaceful conversion was prefereable to war. Ultimately Wolf demonstrates that Segovia's thought on Islam and the proper Christian stance toward the Muslim world was consistent with his approach to other endeavors and with cultural and intellectual movements at play throughout his career.