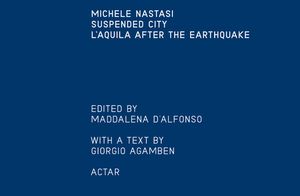 As' happens with every photographer faithful to the original calling of his trade, Nastasi's pictures of L'Aquila are the vehicle for a political prophecy. This prophecy concerns the paradigm of the city as it is imagined or dreamed, more or less consciously, by the ruling powers of the post-industrial and post-democratic societies in which we live. This authority is no longer the sovereign sta te of the ancien régime nor the "disciplinary sta te" described by Michel Foucault. Nor is it, as some would claim, a state in which the rule of law holds. Instead we might call it, to borrow a term already used by political commentators in the United States, a security state. A system in which, according to the message that is drummed into us everywhere and at every moment, 'reasons of security' have taken the place, as arcanum of power, of the "reason of state."